Gems of the Nation

Scholarship programme to facilitate deserving students from less fortunate strata (Whose family income is less than 8000/- i.e. $ 125 Per month) of the society in seeking higher education has become the major thrust area of the organization. This can be fathomed from the fact that the 1,85,000 students supported so far by the organization. 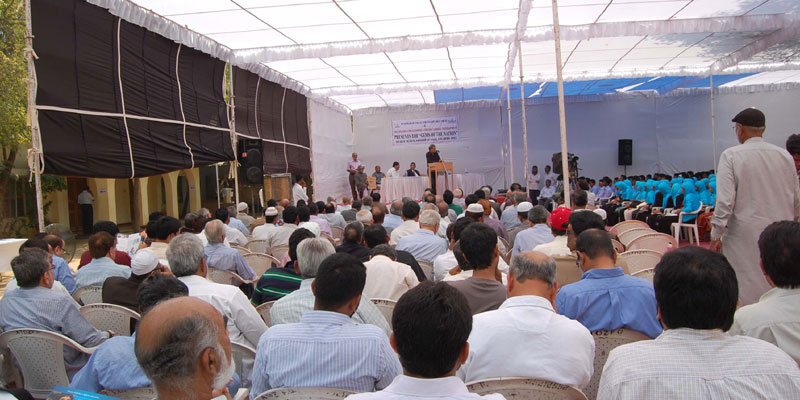 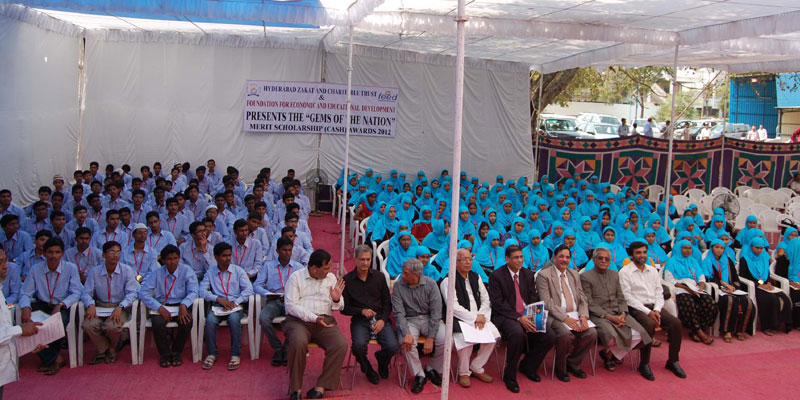 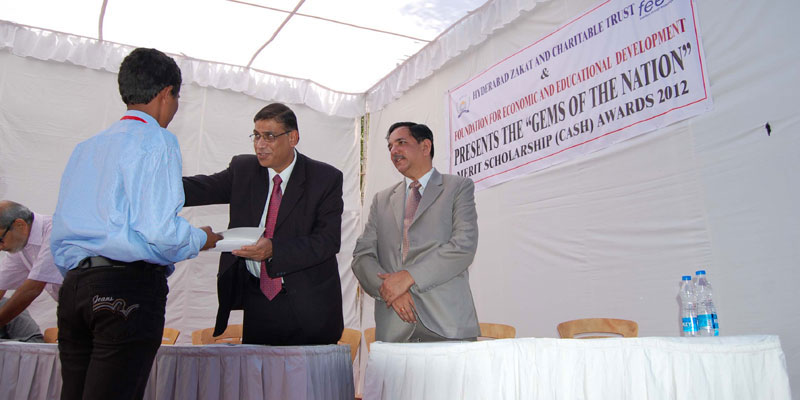 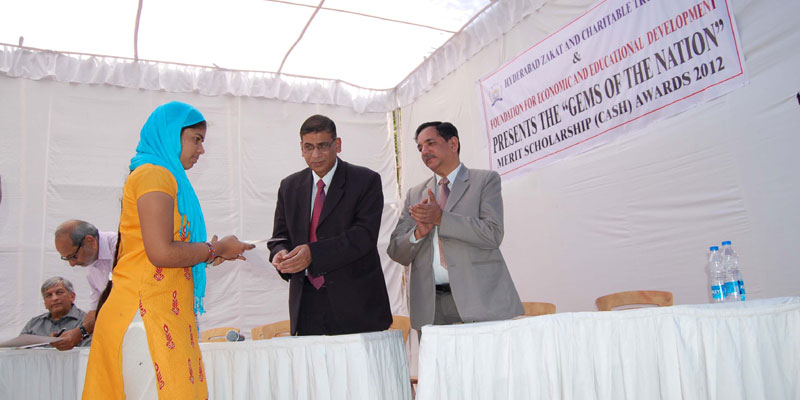 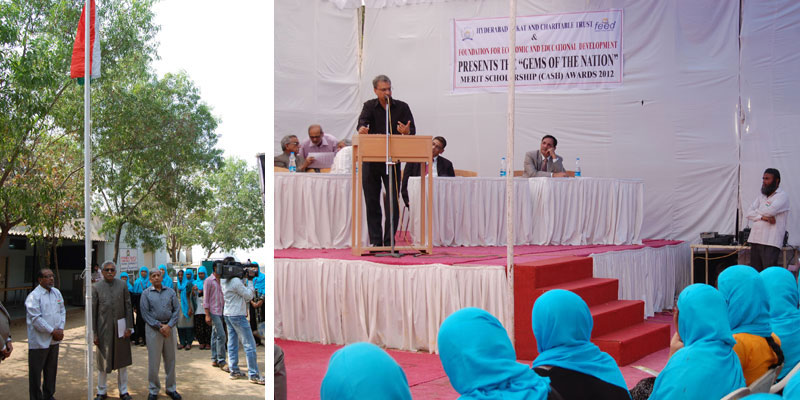 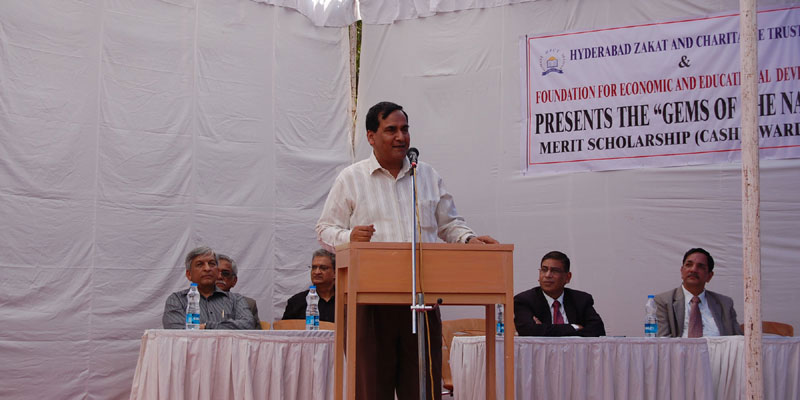 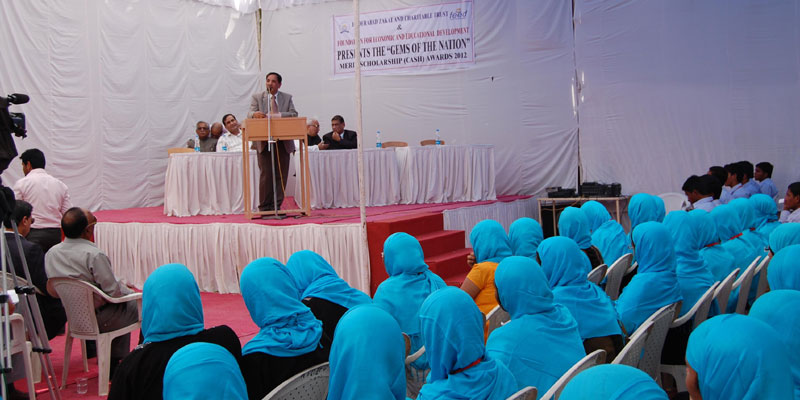 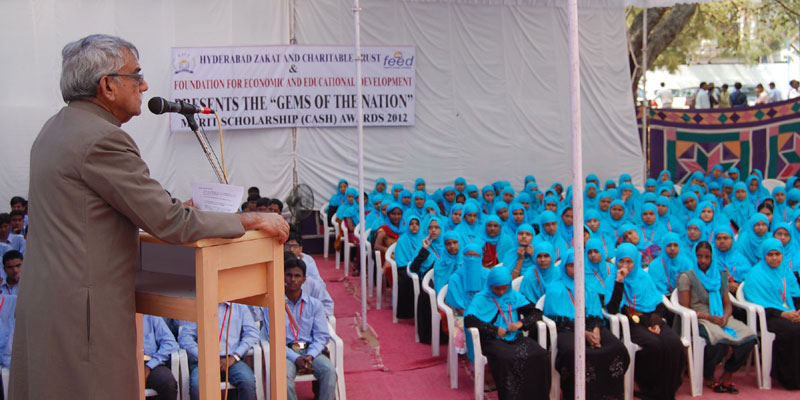 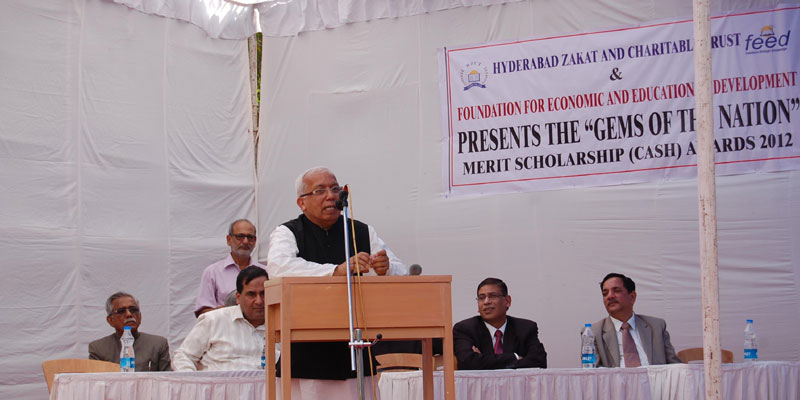 REPORT ON “THE GEMS OF THE NATION AWARD” PROGRAM HELD ON 13-11-2016 We have great pleasure in informing that as part of our Trust activities, a program “The Gems of the Nation Award” was held at our Trust office, Begumpet, Hyderabad, on Sunday, 13th November 2016.

The meritorious and poor girl students of SSC-2016 batch, who secured 9.3 GPA and above were awarded with INR 10,000/- per student, apart from the medal and a certificate. Total of 218 students were selected for this program and an amount of INR 23.98 Lakhs was disbursed.

The function was a grand success with the presence of large number of guest, donors and parents of the award winning students of Telangana and A.P states. Mr. Ghiasuddin Babukhan, briefed the activities of Trust and congratulated the award winning girls students for achieving top rank GPAs which is the result of their hard work in studies and advised the students to maintain consistency in the merits in future to achieve success in every walk of life.

Mr. B. Shafiullah, IFS, MD, Minorities Finance Corporation, Guest of honor of the function appreciated the efforts of the Trust and praised Mr. Ghiasuddin Babukhan, for his dedicated and selfless services extended towards upliftment of community for the last 25 years.

Chief guest of the function Mr. A K Khan, IPS, DGP, Anti Corruption Bureau, and Vice Chairman of Telangana Minorities Residential Schools, commanded on the efforts of the Trust and applauded on the tremendous contribution of Mr. Ghiasuddin Babukhan, for such services, by which large number of minority community is benefitted with education and financial support.

He acknowledged that on behalf of our Trust 5,000 blankets (costing Rs. 11.70 Lakhs) were distributed in 36 Telangana Minorities Residential schools for girls. Subsequently awards were distributed by the chief guest Mr. A K Khan, Brig M M Zaki and Mr. Ghiasuddin Babukhan.

The program concluded with vote of thanks by Mr.Ziauddin Nayyar, Trustee.

May Allah (SWT) Shower His Blessings on all the human beings.

During the academic year 2009-10, the trustees are proud to announce that 240 of the supported students have secured an aggregate of 95% plus in the SSC, Intermediate examinations and College Examinations. The trust presented each of these scholars with a prize money of Rs.10,000. The function was held at Unity centre on 26-01-2011 (Republic Day)

During the academic year 2008-09, the trustees are proud to announce that 127 of the supported students have secured an aggregate of 96% plus in the Intermediate examinations


Gems of the Nation of previous years in diverse academic persuits are as follows:

This was a unique and solemn occasion where the “GEMS OF THE NATION” were honoured by the Trustees, Volunteers, Foreign dignitaries and the Chief Guest, Mr. Jannat Hussain, IAS, Principal Secretary to the Chief Minister. Masha'allah it was a marvellous function. The students were presented with Certificates, Gold Medals, and also Cash Awards to encourage them for their better performances in the future.

The function began with the hoisting of the National Flag and singing of the National Anthem.After meeting and listening to the students, Mr. Jannat Hussain was surprised that there could be so many students from poorest of the poor background, who were State Toppers and admitted that he was not aware of such a wonderful thing that could be achieved by HZCT in locating the students from interior villages.

After seeing Vision 2015 documents prepared by HZCT, he advised Mr. Ghiasuddin Babu Khan and other Trustees to revise the same, as for such a wonderful programme, people would definitely come forward to help the poorest of the poor and brilliant students. He advised the Trustees to establish a Centre on par with Jawahar Knowledge Centre which could impart knowledge in Communication skills, Personality Development, Carrier Guidance, etc. and promised that he would give full cooperation in this regard.